Organic Visibility Score is a metric that quickly summarizes your organic ranking performance. Learn how it's calculated.

It can be difficult to identify how your overall organic rankings are doing on your site, especially when tracking a large number of keywords or would like to visualize trends over time.

Organic Visibility is a metric designed by Dragon Metrics to help quickly summarize your organic ranking performance. This score roughly correlates to the average expected click-through-rate for all keywords tracked in the current set.  Let's take a deeper look at how this metric is calculated.

Every keyword in the set is given a certain number of points according to its organic ranking position. The points for all keywords in the set are summed, and divided by the number of keywords to arrive at an average. This is the Organic Visibility Score for this set.

The points assigned to each keyword are determined by the site's organic ranking position for this keyword, and generally correlate to the expected click-through-rate a URL may receive at this position.

Let's say we have a keyword set with 5 keywords at the following ranking positions: 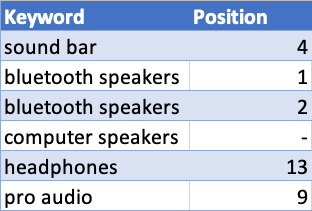 Note that since it's possible for a site to rank for multiple positions with different URLs for the same keyword, each position (URL) will be counted, not just one-per-keyword. This is why in the above table we have two positions for "bluetooth speakers". 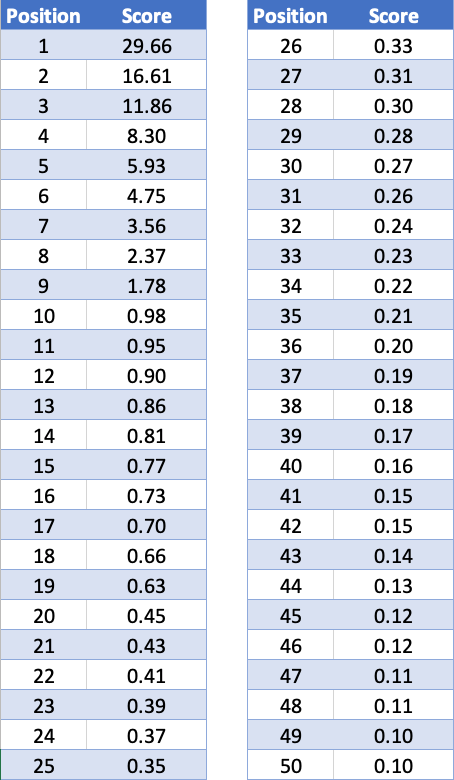 We can now see the score for each keyword position

Finally, we sum the keywords' points and divide by the total number of keywords to find the Organic Visibility score:

The Organic Visibility Score for this set is 11.44

In theory, the highest score a site may receive is 100. However, it's unlikely any site would ever come near a score this high, since it would mean that this site occupies every ranking position from 1-50 for every keyword in the set.

If a site occupies the #1 position for every keyword in the set, the Organic Visibility Score will be approximately 30. For many purposes it may be useful to use this as a "theoretical maximum", though it's possible to exceed it if you rank for more than one URL for each keyword.

What is a good Organic Visibility Score?

Organic Visibility Score can be a very useful way of summarizing ranking data in an easy-to-understand way. However, it's important to remember that this metric should be viewed in relative terms, not absolute. This metric can help you measure performance over time to see how your site is doing compared to last week, last month, or last year. It can also be very useful in comparing how you're doing against competitors.

In general, try to think about the CTR you want to achieve, then aim for an Organic Visibility Score of the same number.