Tracked Competitors shows an in-depth comparison of competitor sites in a campaign. 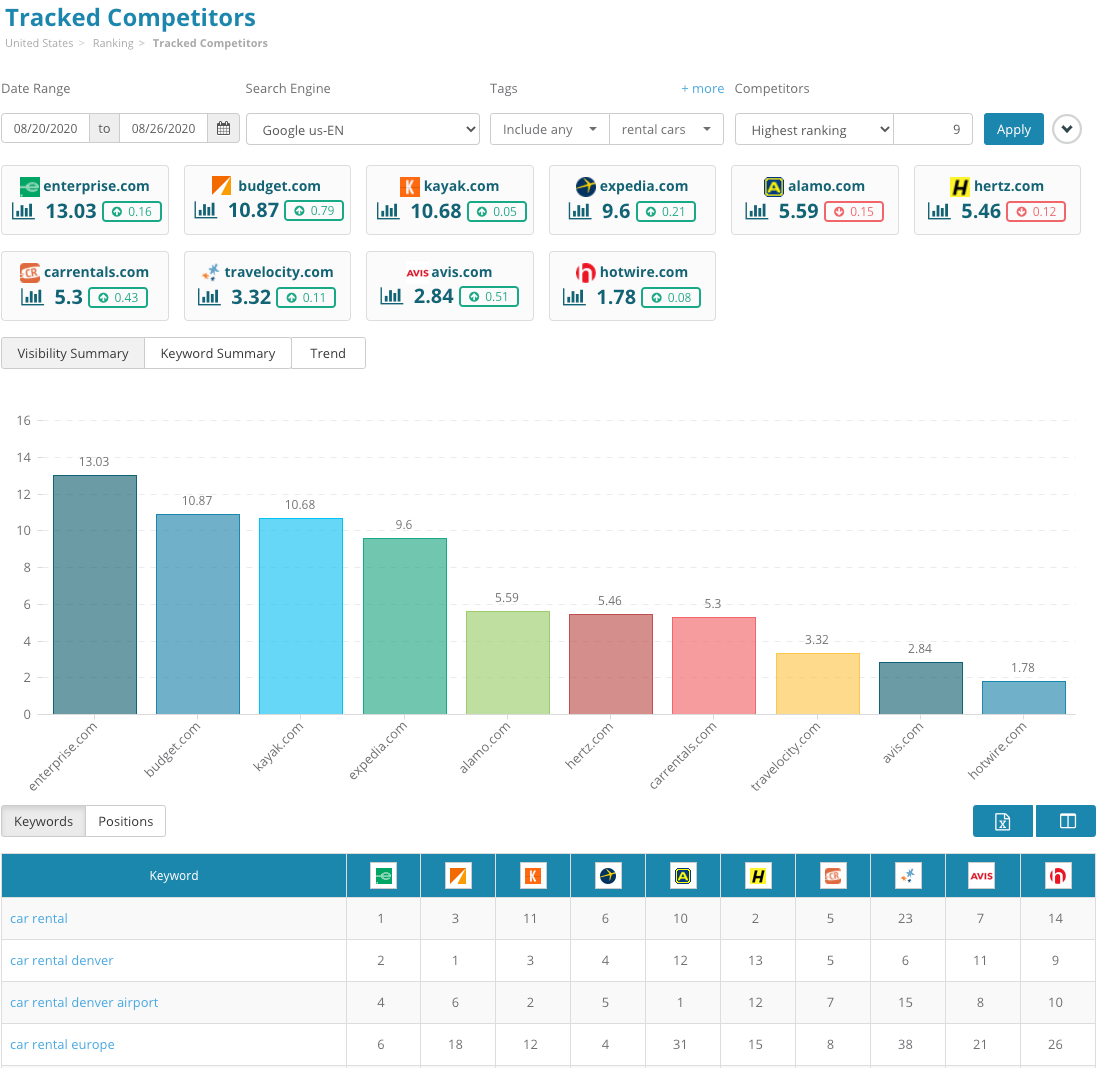 Included Sites on this report

The top ranking 9 competitors (e.g. highest Organic Visibility Score) added to a campaign will be displayed by default.

This number can be changed, for example to view only the top 4 competitors:

If you prefer to choose individually which sites to include, select custom. 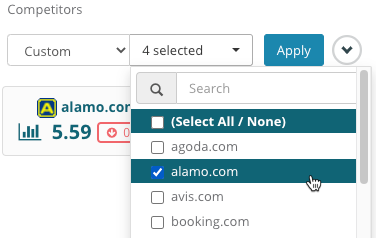 You can even choose to display All competitors in this campaign, but please note that a maximum of 9 competitors and the main campaign site will be shown in most areas on the report. Only on the Positions table will all competitors be shown.

At the top of the page, the Organic Visibility Score for each competitor, along with the amount it's changed during the selected date range.

Organic Visibility Score is a metric used many places throughout the Dragon Metrics platform. It's roughly analogous to the average expected click-through rate of all keywords in the set. Learn more about how this metric is calculated.

There are 3 types of high-level charts for this report.

Visibility Summary displays the Organic Visibility Score for each competitor 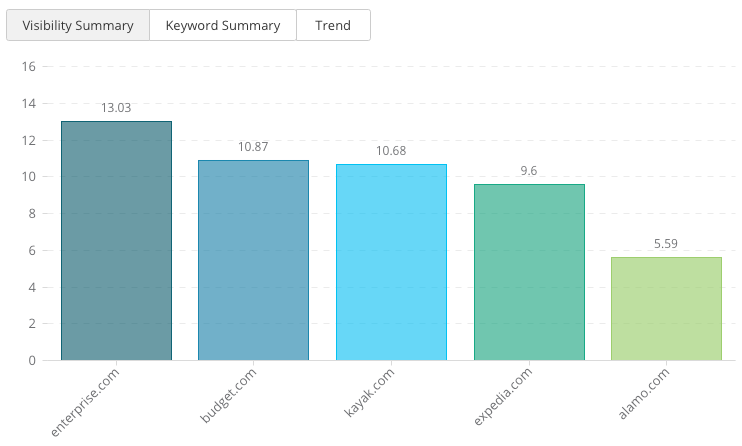 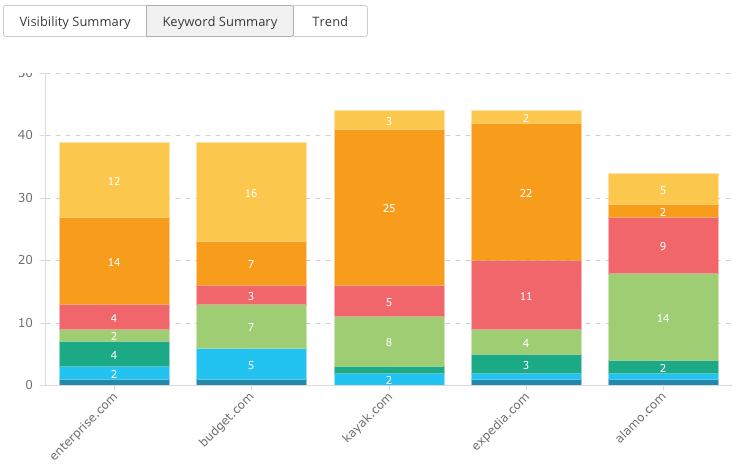 Trend shows a history of the Organic Visibility Score over time: 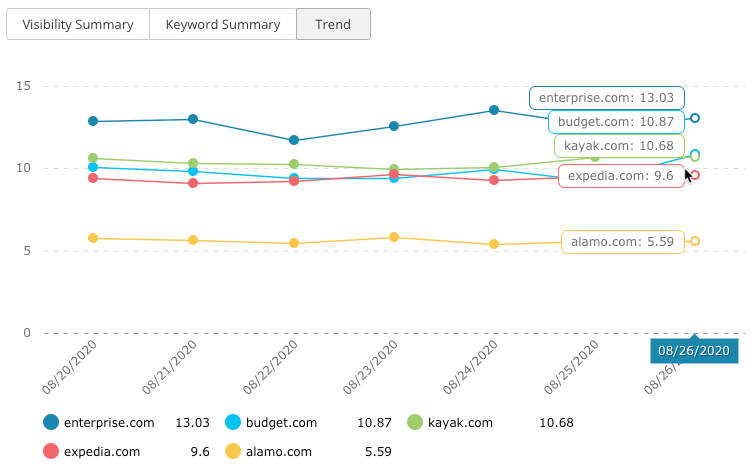 There are two options for the table:

Each row in the keywords table is a different tracked keyword. Each column is a tracked competitor.

The site's favicon identifies each column, but if you need a reminder on which site it is, hover your cursor on the table header to reveal the URL.

Click on a keyword to bring up even more details, including 4 tabs:

This tab displays the top 50 ranking URLs, each with the SERP feature type and the title. 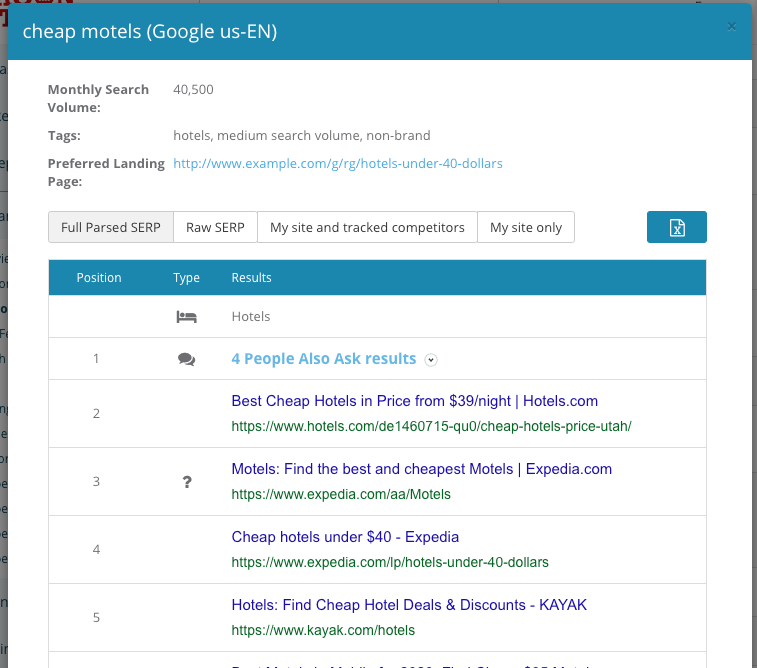 The actual SERP that Dragon Metrics collected can be viewed in the Raw SERP tab. 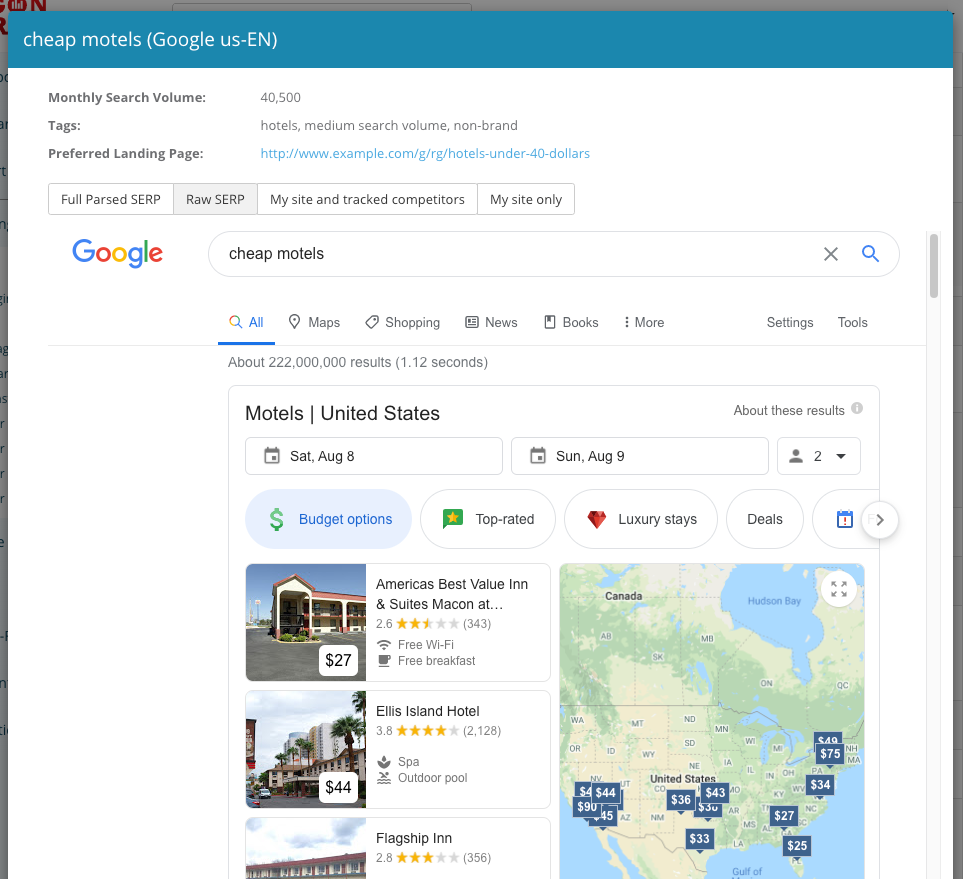 My site and tracked competitors

This tab displays a trend of your site compared to competitors over time. 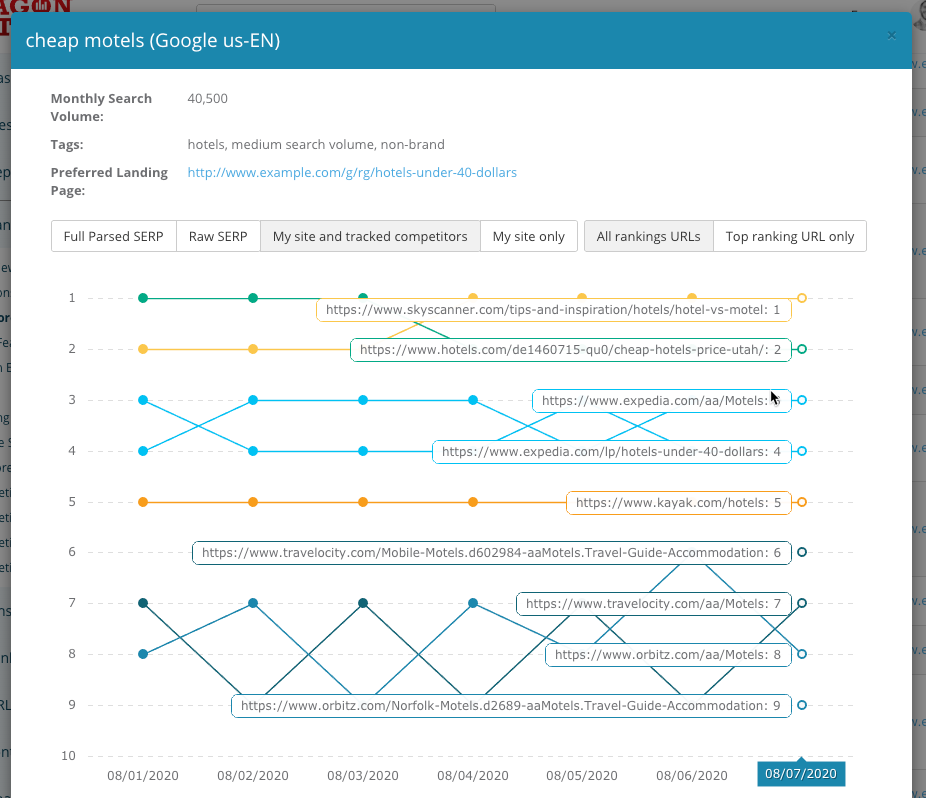 By default, only the top 10 URLs will be shown in the chart, but more can be added by clicking the checkbox next to each in the table. 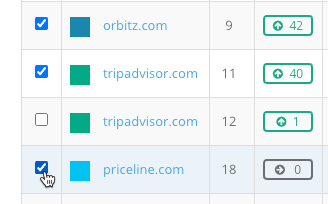 By default, each graph in the chart and row in the table is a single ranking URL. To group competitors by site and only show the top ranking URL each day, click Top ranking URL only. This can greatly simplify the chart in many cases.

This tab is essentially the same as My site and tracked competitors, but only shows the main campaign site.

This tab is especially useful for tracking keyword cannibalization, when multiple URLs are fighting over the same keyword. 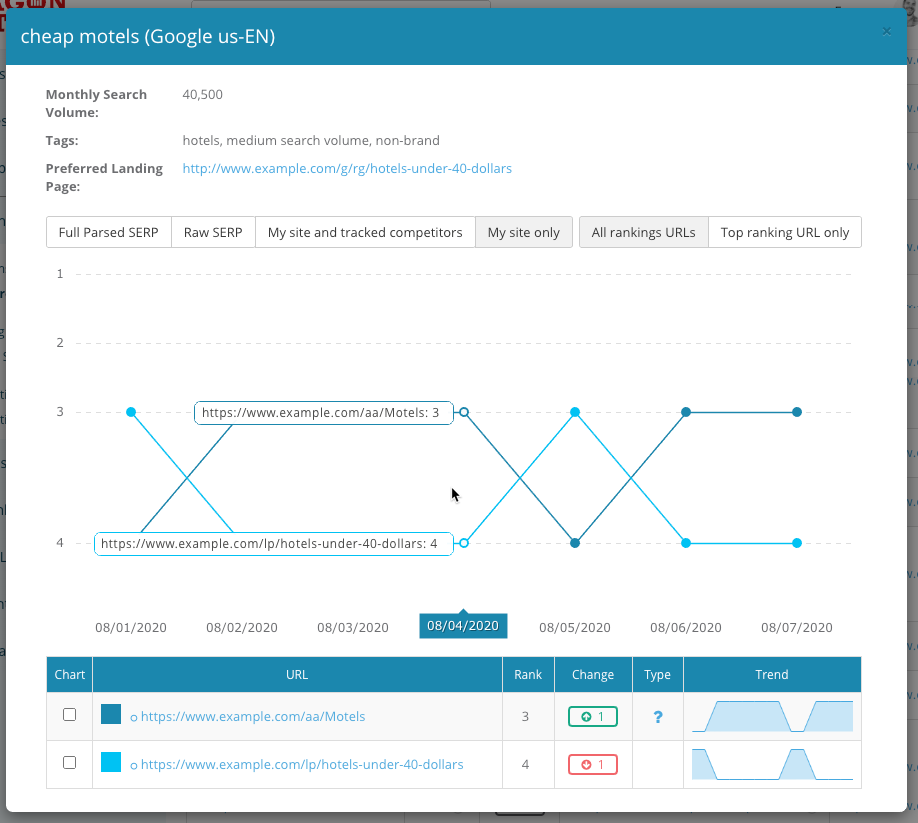 Back on the keywords table, additional columns can be shown by clicking the View Options button 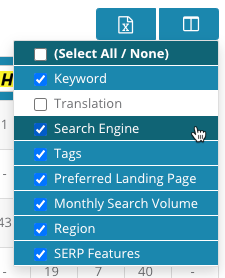 Data can be exported to Excel by clicking the button in the upper right of the table.

To see high-level site ranking data, click the Positions button in the upper left of the table.

Here, the Organic Visibility and the number of keywords ranking in each position group is shown for each competitor site.

Just like the Keywords table, additional columns may be shown or hidden using View Options and data can be exported to Excel using the buttons in the upper right of the table.

Tags are one of the most powerful ways to segment your keywords. On this report you can filter by one or more tags to see only set of keywords you're interested in. 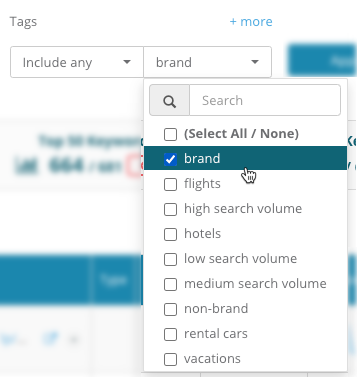 If multiple tags are selected, you can choose how keywords are chosen for inclusion on the report. 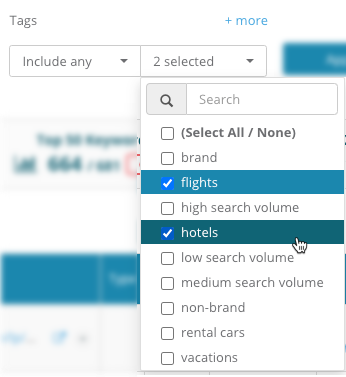 If Include any is selected, keywords that include any of the selected tags will be included.

If Include all is selected, only keywords that include all of the selected tags will be included.

You can even build more complex queries by adding another Tag filter. Just click +more

An additional Tag filter will now be available (joined with boolean AND logic).

For example, to view keywords that tagged as non-brand and either high or medium search volume, you could use the following filter: 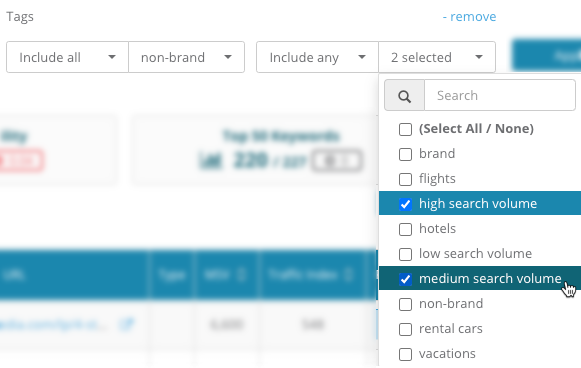 Dragon Metrics tracks over 30 types of SERP Features (e.g. map packs, images, videos, featured snippets, people also ask, etc). By default, a site's presence in one of these rich results will be counted as an organic ranking. If you'd prefer to exclude these result types from being counted as organic ranking, set this field to No.

For example, a site is ranking in a local map pack at position 1 and again at a normal organic result at positions 6 for the keyword car rental orlando airport. By default, the ranking for this keyword will be #1.

To exclude this map pack result, set Include Universal Results to No. With this result now ignored, the highest ranking non-universal URL for this site is now #6.