All Collections
Campaigns
Frequently Asked Questions
What does pausing a campaign do?

What does pausing a campaign do?

Written by Marc Agate
Updated over a week ago

Pausing a campaign is a useful alternative to deleting campaigns.

When a campaign is paused, all data collection is stopped (rankings, site crawls, link tracking, reports, etc.) and frees up all credits used by this campaign, but leaves existing data intact. Campaigns cannot be accessed while they are paused, but they can be re-activated at any time, and all data saved in this campaign will be made available again. 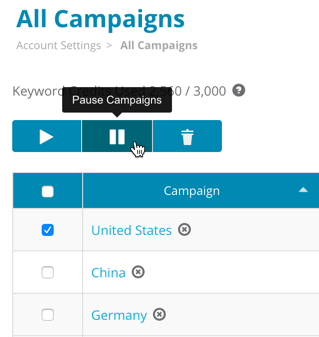 No data is collected during the time the campaign is paused, so you will not see any data during the inactive period after a campaign is re-activated.

Pausing a campaign can help free up credits to add more keywords or campaigns in other places in the account. In most cases it's usually preferable to pause a campaign instead of deleting it since there are no negative consequences for pausing a campaign.

The only potential benefit to deleting a campaign instead of pausing is to clean up the All Campaigns table if it's getting a bit too long and you're sure you do not want to ever access a campaign again.

Since deleting a campaign permanently deletes all data that goes along with it, if you think there's a chance you may ever want this data again someday, we recommend pausing it instead.

Learn how to pause a campaign here.